This is the mandate: now you have to architect!

This said, the “performance anxiety” is the first and foremost symptom that is identifiable: YOU have to do something while YOU will be tested. Because there is someone else (spectator(s), inspector(s), judge(s)….) who is asking you to architect now.

NOW has a duration that is different from TODAY. “Present” and “contemporary” are words that express a duration according to a before and an after. There are no certainties about time; and NOW has been a time during which we have been given the chance to express and to demonstrate no certainties at all. For someone who is tested about doing something, the absence of certainties does not help: do whatever you want but do something because you have to!

The YOU asks: how much time do I have? The answer is: The time you have available to architect something, is something you have to decide about. So the YOU is free to decide.

The other interesting aspect of the mandate is the imposition: to HAVE TO. I might rebel against this imposition. Would the rebellion against it, be an acceptable fulfilment of the mandate?

The kernel is the liaison (trait d’union) between HAVE TO and TO ARCHITECT.

TO ARCHITECT means to know the principles (archè) upon which a certain kind of technique is based. This technique is the art of building. It is very positive that today we are gaining a vast context to situate what is the  meaning of the term  architecture  and  what an architect is meant to be doing. From metaphysical speculations, political activism, virtual imagination, global fiction, stage set design, rendering to real estate management and construction specification , the context is vast because the meaning of the word architecture is ALL-INCLUSIVE.  It was originally formulated to mean basically everything; everything we can know in term of human technical dedication.  And since the human exists only in term of technical dedication, architecture is the reasoning on the way we exists: the principles (archè) of our technics.  To think that this technique is basically tectonic is certainly a good attempt to frame and limit the vastness of the context. But I believe that an architect should make the effort to refer to the mandate that the name implies. I believe so because this mandate is very important.

So, this is a more extensive formulation of the mandate: in a lapse of time that it is your task to define you must fulfil the task of knowing the principles upon which the art of building is based.

I rely on the possibility to define the symptomatology of the anxiety of the performance due to the cruelty of those in charge of the testing.

To let the anxiety being fully absorbed into the duration of the now the architect must practice a passage in time (hole) that is the stenosis of an hourglass.

The stenosis of an hourglass.

To build implies the occultation of something. Traditionally something must be “buried” inside the building. Obviously to build also means to make something evident, available to inspection; but that which is inevitably occulted was already waiting there. Where and what are we trying to hide?

I am stydying two cases of occultation: the Fabbriceria and the BIM.

The Fabbriceria is a “room” with a very ancient tradition and still operative today in the form of the builder’s office on the construction site: a place where you can keep everything that is relevant for the construction while the construction is ongoing. No matter how carefully you intend to preserve that something the risk it runs is always that of vanishing. The risk it runs motivates it. So there is a hidden anxiety in the building and the construction of something and this hidden anxiety must be occulted. Archaically in order to keep this hidden anxiety occulted the architect had to be killed at the end. All the documents that might survive after the death of the architect are the proofs of the architect’s culpability. The forgiveness after building is postponed into infinity. The end is ideally postponed indefinitely like in The Thousand and One Night. I will present two cases of Fabbriceria. One is the historical Fabbriceria of San Petronio in Bologna. The other is a case of a humble barrack on a construction site.

The BIM is now one of the most top-rated digital “tools”. I am interested in its capacity to store a potentially infinite amount of data – “big data” – concerning the building. This is a very interesting way to occult: by applying sensors and digital surveying systems to anything, you can know anything in “real time” and store anything concerning anything in a mass of data that is bigger than the real (mise en abyme). Being always more than anything you might be interested to know about anything, the BIM is the fulfillment of the project of the proportion between the microcosm and macrocosm. Like exposing his own beating heart to the dying victim of a sacrifice the BIM disorients whoever wants to know.

I will develop my research on two cases of BIM’s application: one concerning a public building and the other relating to a project of “diffused” BIM - Building Identification (Identity Card), as suggested nowadays (in Europe), for everybody who wants to know the documents and all the information that are relevant for the building they buy, or live in.

That which is occulted inside or outside the building – more or less carefully preserved or contained, often inexorably dispersed, available on condition or hidden behind an inscrutable storage of big data – is its representation and its honesty depends on our willingness to know without being obsessed by the insistence to deceit. 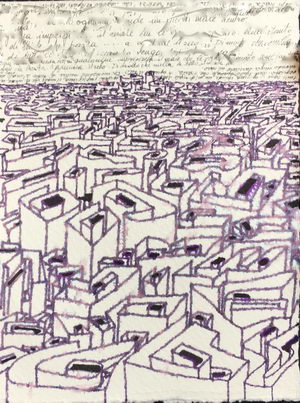 Each house has its black box (flight recorder).